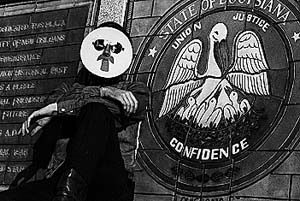 This is your official invitation to become a Politickle Pal on Facebook.

When I launched my career as a social satirist back in 1978, there was no such thing as the internet, much less Facebook and Youtube. Making your own videos was prohibitively expensive, and buying airtime to broadcast them was out of the question. The only solution — the only one I could come up with, anyway — was to trick the radio and TV stations in New Orleans (my hometown) into recording my antics and broadcasting them free of charge. Believe it or not, it worked.

As a vehicle for my “performance art” (a term not yet coined), I started my own Mardi Gras group, the Spontaneous Krewe of Platefaces, and during carnival season sent press releases to the hometown media promoting my latest satirical thrust. Every year I was interviewed, plate on face, by at least one radio and one TV station and soon became, on the local level, an anonymous phenomenon. On Mardi Gras day I’d jump out ahead of the Rex parade on St. Charles Avenue and lead a small band of spontaneously recruited krewe members (a proto-flash mob) down to Canal Street, where we dispersed and went our merry ways without ever bothering to make each other’s acquaintance.

That went on for several years, but, eventually, life intervened and I had to be serious for a while. Then, in 1997, I launched my weekly Politickle via email and internet and was back in business. Now, here it is 2011 and I’m still at it — flailing away at impostors, poseurs, and flimflammers.

Why not join me as a Politickle Pal on Facebook? You can comment on my weekly limericks or write your own. (Keep it clean. No Nantucket stuff.) Invite your friends to get in on the action. Click here to get started. Let’s have some fun.