“That was some great Cajun food!” said Frank Parrish to the head cook at Chez Louisiane after a sumptuous meal of filé gumbo, shrimp Creole, and bread pudding in the first episode of the critically acclaimed 1987 TV show Frank’s Place.

Frank’s compliment was not well received. As the cook glared at Frank, his assistant explained: “That ain’t Cajun food, Frank. That’s Creole!”

While feature films and television programs frequently blur the distinction between New Orleans and its Cajun neighbors in southwest Louisiana, the producers of Frank’s Place were uncommonly meticulous. The show’s creator, Hugh Wilson, and its star, Tim Reid, visited New Orleans to search for a restaurant to use as a model for the show.

They found it in Chez Hélène, an award-winning black Creole restaurant on the outskirts of the French Quarter.

The restaurant’s decor and its staff and clientele were faithfully recreated in the television program. Tony Burton, who played the cook, bore an eerie resemblance to Chez Hélène chef and proprietor Austin Leslie. Leslie, who served as a consultant to the program, personally prepared the mouthwatering dishes shown in the opening episode. He also catered that first taping and claimed with justifiable pride that “the food made everybody act good.”

Austin Leslie has passed away and Chez Hélène is no more, but the Leslie legacy lives on in a pocket-sized cookbook published in 1984, which features, among other culinary delights, this delicious gem: 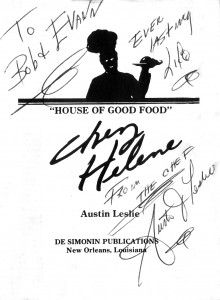 Preheat oven to 350 degrees. Wet the bread and squeeze the water out of it. Melt the butter and mix with all other ingredients. Pour mixture into a well buttered 8 x 11 inch baking pan. Bake for 40 to 50 minutes or until a knife inserted in the center comes out clean. Serves 8.

Whip butter until light and gradually add the sugar until the mixture is fluffy. Next, add rum and beat several more minutes. Refrigerate. Serve over warm pudding.