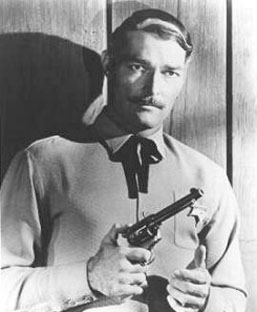 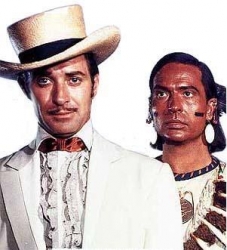 The Lawman came with the sun.
There was a job to be done.
And so they sent for the badge and the gun
Of the Lawman.

“There was a job to be done.” That was the second line of The Lawman theme, and every boy in my first-grade class knew the song by heart. Marshall Dan Troop, played by John Russell, was one of our TV heroes — along with Paladin and Marshall Dillon and the Cartwrights. The theme was so popular that it inspired a coarse playground joke: Q. Why did the Lawman pull down his pants? A. There was a job to be done.

Moronic, no doubt, but to the six-year-old mind hysterical.

I’ll never forget the night in 1962 when my dad got off the phone — we had only one back then, a wall model in the kitchen, beneath a cabinet next to the sink — and asked me to guess who he’d been talking to. Of course, I had no idea. “The Lawman,” he said, and was I impressed!

They’d served together in the Marines in the South Pacific during World War II, and that second line of The Lawman theme seemed to be an unofficial Corps motto: “There was a job to be done.” It had been an ugly and dangerous job, but it had been their job, and they’d had to do it.

My dad never talked much about the war, at least not to his children. Another Marine buddy who lived nearby would come over every now and then, and they would talk about their service occasionally, but only in whispers and when they thought we weren’t close enough to hear them.

Riverboat gambler Yancy Derringer, played by Jock Mahoney, was another of our TV heroes — one I can’t remember fondly. Because the show was set in our hometown, my father once had the opportunity to attend a promotional event on a New Orleans riverboat and meet Mahoney, who’d also seen service during the war as a Marine. Apparently, the subject of the war came up, Mahoney exaggerated his own role in it, and my dad, knowing better, called him on it — forcing Derringer’s faithful Indian companion to intervene and prevent a disturbance.

I guess that’s how I learned to tell a real Marine from an impostor — and why, to this day, I can’t stand to let a lie go unchallenged. I learned it from my dad. And now I’ve got a job to do.