This year marks the 50th anniversary of the debut on New Orleans television of House of Shock, hosted by Dr. Momus Alexander Morgus. . . . I’m happy to report that the Doctor is alive & well, and still tinkering in the Old City Ice House. And I know that he’d be tickled if you could show your support and appreciation by helping him celebrate this special day by logging into the website and sending him a special 50th anniversary greeting in the Guestbook. . . . — Dr. Chuck Brillowsky, webmaster 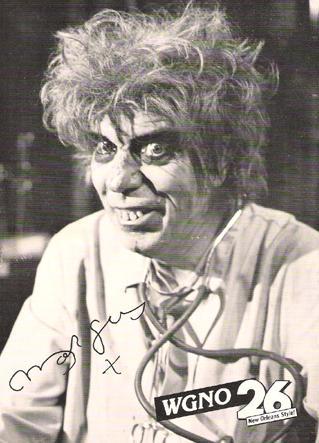 The House of Shock was a weekly television program that we watched as kids in New Orleans, featuring a horror movie hosted by a mad scientist named Morgus the Magnificent (created and played by Sid Noel). Morgus would introduce the movie and do wrap-arounds, returning before and after commercial breaks to continue his “experiments.” I never cared for horror movies, but I did love Morgus. I’d get up, leave the room, and find something else to do during the movie, but hurry back during the breaks to catch Morgus’ antics.

Everybody in New Orleans loved Morgus. One of my mother’s prized possessions was a lock from Morgus’ fright wig that Sid Noel had bestowed upon her at a party for local media people in the 1960s. In the early ’90s, I had the pleasure of meeting Sid Noel myself, when I created a television campaign for the local cable company starring mad-scientist Morgus trying to invent a machine to steal cable programming.

Noel subsequently dropped by the house to visit with my wife and me, bringing along autographed photos of Morgus for the kids. Believe it or not, the man behind the mad scientist had developed a comprehensive character education program that he hoped to sell to the public schools, and we helped him prepare some promotional materials for it.