Bayou Bob, Père Robért, T.J. Pleindemerde, Murray Gold, Omar Cayenne, Armand Legg — these are but a few of the pseudonyms and aliases I’ve used over the years, for fun and profit. I once struggled to convince a skeptical landlord that all five of the names on my mailbox belonged to me and that the apartment I rented from him was not overrun with squatters. Under one alias or another, I founded an extraordinarily thrifty New Orleans carnival krewe whose costumes consisted of masks made out of paper plates; rewrote (in one day, for a flat fee) the captions for a Simon & Schuster cartoon book so inane that I didn’t care to have my real name attached to it; and received an advertising award, in absentia, for a free-lance job that was judged superior to material submitted by my daytime employer. I’ve used pseudonyms to protect my privacy, to forestall reprisals from cranks and crackpots, and to liberate my imagination from the pedestrian persona of a mild-mannered reporter. When the occasion warrants, I’ll use them again — on the Internet or anywhere else I please. For all you know, I may be using one right now.

Back in the late 70s and early 80s, I was the Clark Kent of New Orleans — a strikingly handsome, but humble reporter who just happened to be the only guy in town who could get in touch with Superman. Only it wasn’t Superman that I had direct, exclusive contact with, but someone just as exotic: John Smith, the anonymous and mysterious captain-for-life of the Spontaneous Krewe of Platefaces, the world’s cheapest and most creative Carnival krewe. No one knew where Capt. Smith had come from, or cared particularly, but everyone acknowledged that there was something very different about him, and gave him credit for saving Mardi Gras in 1979 by parading as usual when a police strike forced other, more established krewes to abandon their revelry.

As with Superman and Clark, Smith and I bore a striking resemblance, only no one knew because Smith kept his face completely concealed, at all times, behind a paper plate, and I occasionally wore glasses. As a public service, I arranged interviews with Smith for some of the biggest names in New Orleans media: Times-Picayune columnists Angus Lind and Betty Guillaud, Channel Four television reporters Eric Paulsen and Ed Clancy, radio deejays Rick Zurich and Katy Carroway, ETC. But the biggest, most sensational interview of all was the one I conducted with Smith myself for the Baton Rouge weekly Gris Gris. I was determined to scoop my colleagues by getting him to reveal his true identity, but Smith remained elusive as ever. Still, it may have been the highlight of my career, and certainly was of his.

The Spontaneous Krewe of Platefaces 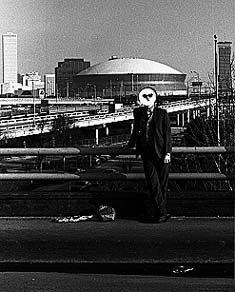 To learn more about the world’s cheapest carnival krewe, click on the logo below.

John Smith on All the Issues

In today’s Politickle Video, Presidential candidate John Smith recaps his positions on all the issues.

This is the final installment of our 10-part series on “consensus candidate” John Smith, featuring highlights from the previous episodes. Be sure to share this special compilation video with all your friends and enemies. And stay tuned for our next program, “Dr. Bob Explains Everything,” premiering soon!

“In a democracy like the United States, government is based on majority rule. But what if you’re in the minority? That’s a real bummer. . . .”

“My opponent has suggested that I am somehow unqualified to be president — that I lack experience. . . .”

“Some people have to pay more taxes than you do, but that’s okay. On the other hand, some people pay less — and that’s not fair! . . .”