How Do They Know? 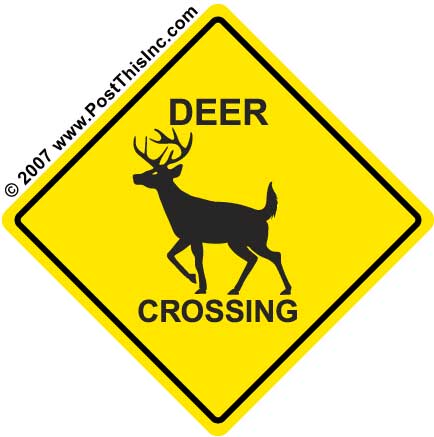 The church we go to, St. Anselm’s, is in a heavily wooded section of St. Louis County. There’s a deer crossing sign on the main road just before the entrance to the parking lot. One day my wife was talking to some other women in the parish about the abundance of deer in the area and one of them mentioned the sign, at which point another woman asked: “How do they know to cross there?”

Media Bias? Say It Isn’t So!

The public opinion of the media does not run high in [2008], and yet a scathing attack on journalists and their penchant for distorting or fabricating the news appeared in 1937. . . . It was penned by a sometime member of that disreputable profession, who with this book and a half dozen others established himself as perhaps the foremost satiric novelist in the history of English literature. — “The End of Satire,” F.R. Duplantier

The ombudsman for the Washington Post admits that her paper slanted its coverage of the 2008 presidential campaign in favor of Obama. This is a revelation? I don’t think so. Just business as usual.

My older brother, Chris, now 53, was born with Down Syndrome. In 1963, my father published a five-part series in the New Orleans States-Item entitled “My Son Chris is Retarded.” The series was nominated for a Pulitzer Prize and drew the attention of Kennedy inlaw Sargent Shriver, who, early in 1964, invited my father to serve on President Johnson’s new Committee on Mental Retardation. (The 1963 Prize went to coverage of the assassination.)

Maven, the virtually infallible brain of computer Scrabble, made a big mistake yesterday. On his second turn, he played a horizontal word starting with g in the far left column, halfway between the two triple-word scores, setting me up for a triple-triple, eight-letter bingo (9x the total point value, plus 50 for the bingo). I played stod[g]ier, for 131 points in a single turn! Take that Maven! Humans rule!

“Charitable organizations must not forget the Christian meaning of their activity, influenced by the present philanthropic climate or by excessive reliance on public funds,” [Cardinal Paul Josef Cordes said in an address to U.S. bishops this morning]. Catholic charity, Cordes said, is intended to be a “sign of God’s goodness.”

Cordes said that Cor Unum recently organized a set of spiritual exercises for leaders in church-run charities, to some extent designed to foster a clear sense of what makes Catholic charitable activity distinct from its secular counterparts. — National Catholic Reporter

It’s about time the Church did something to rein in the radicals who have been subverting her doctrine for the last 50+ years. But don’t expect “spiritual exercises” to bring them back into the fold. The Lefties are convinced of their own sanctity and think that everything they do is holy, no matter how malicious. Catholic Charities and the Society of St. Vincent de Paul have been infiltrated by change agents determined to hijack these worthy organizations and use them to enact their own “social justice” agenda.

I’m the son of two Marines! That may not be so unusual today, but back in 1956, when I was born, it was pretty weird. That was the year Carl Perkins, and then Elvis Presley, released “Blue Suede Shoes.” I remember listening to both sensational versions in my mother’s womb and thinking, “Let me out of here. I want to dance!” Years later, in the early 1980s, I actually got to hear Carl Perkins perform that song, and others, at Tipitina’s in New Orleans.

My mother, Peggy Mengis Duplantier, was one of the first women Marines. She and my father both served with the Corps during World War II. They met in New Orleans afterward, when both worked for newspapers there. Here’s an article my mother wrote for me when I was editor of The New American in the mid-eighties, about “Molly Marine,” the first statue of a service woman in uniform erected in the United States. Here’s another she wrote, about “The Moving Wall.”

My father, Crozet Duplantier, fought in the Pacific (Guam, Guadalcanal, etc.) and served with the occupation troops in Japan. If not for the much-lamented dropping of atomic bombs on Hiroshima and Nagasaki, he would surely have been killed in the inevitable invasion — and I wouldn’t be here.

As the son of two veterans, I’m doubly grateful on Veterans Day. God bless all our troops, living and deceased, today and always! Semper Fi! 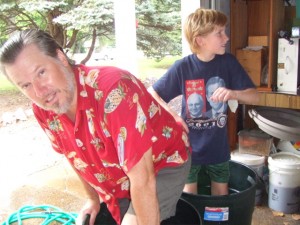 There They Go Again!

When [Minnesota] voters woke up on Wednesday morning after the election, Senator Norm Coleman led Al Franken by what seemed like a relatively comfortable 725 votes. By Wednesday night, that lead had shrunk to 477. By Thursday night, it was down to 336. By Friday, it was 239. Late Sunday night, the difference had gone down to just 221 — a total change over 4 days of 504 votes. — John R. Lott, Jr., FoxNews.com

What is it with Democrats and vote fraud? Do they consider the electorate too stupid (or smart) to recognize their superiority? Are they so full of self-loathing that they doubt their own ability to attract sufficient votes? Are they constitutionally unable to resist the temptation to cheat?

It’s all so brazen, too. They steal elections in broad daylight now, on live television, right before our eyes. And the amazing thing is, they manage to convince half the populace that they’re really fighting against vote fraud — that it’s actually the victim, the candidate having the election stolen from him, who is trying to pull a fast one. To this day, we still hear snide remarks about George Bush stealing the 2000 election, as though the efforts of Al Gore’s minions to divine the implications of dimpled chads was not the most audacious attempt at bamboozlement in American history.

Just recently, when I lamented the likelihood of Obama benefitting from vote fraud in key localities around the country, a seemingly intelligent relative remarked that he imagined Republicans were just as guilty of such things. That’s some imagination, given that the vast majority of vote fraud is, and always has been, committed by Democrats. Perhaps they deserve credit for trying to extend the franchise to all the groups that now vote fraudulently on their behalf (felons, illegal aliens, etc.), so that they can win elections fairly.

Imbroglios like the one that followed the 2000 election are certainly to be avoided, if at all possible, but the consequences of ceding the election to a person with no moral character, a thief (e.g, JFK), are far more serious.

Here’s a series I did on the “election” of another thief:

Will the Senate Wink at Vote Fraud?

Bogus Balloting in the “Big Easy”

Voting’s A Sure Thing for Gamblers!

Feel free to publish, post, or pass on Your Weekly Politickle by F.R. Duplantier:

HOPE AGAINST HOPE
By nefarious allies surrounded,
With socialist nostrums propounded,
Obama has won,
The change has begun,
And I hope that my fears are unfounded.

HAPPY DAZE
“He’s compared to the Christ and to Gandhi,
He’s offered us all bags of candy,
But he got my vote when
The endorsements came in
From the Fonz, Richie, Opie, and Andy.”

CHANGE AGENT
“I’m a master at deceivin’,
At wigglin’, wafflin’, weavin’;
And when I create
A socialist state,
You’ll have change you can believe in.”

MIGHTY HOAX
Assigning bailout blame
Can be a cryptic game,
One must be deft,
Read on the left:
Now you know the name.

OBAMA NATION
All that socialist “change” is deceivin’
And so-called “social justice” mere thievin’,
But five ones for a fin
Or two fives for a ten —
That’s the kind of change I can believe in.

Put your faith in a public place with religious novelties from thankevann.com.