Is It Wine Yet?

Is It Wine Yet? 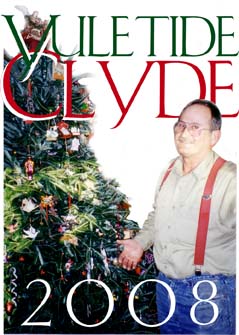 When we first moved to St. Louis in 1995, we rented a small house on the edge of a pumpkin farm in the bottomlands near Creve Coeur Lake (a house that had been submerged in the “Flood of 93,” but that’s another story). It was there that we first met “Farmer Clyde,” the crazy old coot who grew the pumpkins and immediately appointed himself our guardian angel. Two years later, we were evicted to make way for a state highway expansion, and Farmer Clyde helped us move our stuff to the next house we’d rented, in Balwin, just south of Queeny Park. Two years later, we were evicted again, to make way for a developer. When we first came to look at (what would be) our next house, in Bridgeton near the airport, we peeked in the backyard and came back to the car with downcast faces to alert the kids that there was a big hole in it. “Swimming pool!” they all shouted. My kids aren’t stupid.

But we had another surprise in store for us. There were vines growing all along the chain link fence that enclosed the backyard, and by early summer we had confirmed that they were concord grapes. Being a farmer and knowing that we were New Orleanians, Farmer Clyde proposed that we make wine. The resolution passed unanimously.

We collected the grapes in September, stomped them, let them sit for a week, and then pressed them with an ancient apple press that Clyde had found in a mudhole down in St. Genevieve and extracted with his old Oliver tractor. Then we poured the juice and hot sugar water into a barrel, plugged it, and asked Clyde the question that had been haunting us: When will it be wine?

Clyde’s not the most straightforward person in the world, and he succumbs occasionally to the rural temptation to bamboozle the city slicker, so we always interpret his responses carefully. But, when he allowed as how we might be able to “taste” it around Halloween, we protested vehemently: “That’s more than a month away.” He complimented us on our mathematical prowess. “But when will be able to drink it?” we demanded. “You could tap a bottle for Thanksgiving, but it won’t really be wine ’til Christmas.”

Well, we tasted it at Halloween and it was terrific! No, Clyde said, it wasn’t wine yet. Hmm. Is he serious, or just tantalizing us? It was impossible to know for sure, so we let it sit. At Thanksgiving, it was far superior, and we realized that Clyde had been right: it wasn’t really wine yet at Halloween. Now it was wine! Right? No, he said, not yet.

Clyde has a sadistic streak, and we were beginning to think it was showing, but we held off. Then, the week of Christmas, we tried it again and wondered how we could have been so stupid. That junk we’d tasted before was just hopped-up grape juice. Nothing like wine at all. This was wine! Wasn’t it?

Clyde held a glass up to the light, admiring its color. He tilted the glass and watched the fluid coating the inside slowly recede to level. He smelled the bouquet, took a small sip, and licked his lips.

At last, Clyde nodded. It was wine!

This morning we drove down to St. Genevieve for the funeral of Clyde’s dad, Willie Bruckerhoff, who died Tuesday at the age of 91. This year’s vintage — sure to be a very good one — is dedicated to him.